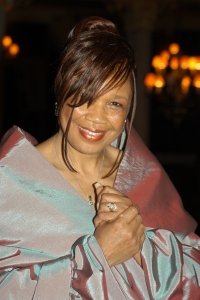 ---------------------------------------------
Designer: Beulah Cooley is a Native of Philadelphia, Miss. moved to Detroit, MI. in 1977.
Beulah has been designing clothing since she was a child. Using her dolls as models, she began sewing in the eight grade and making her own wardrobe.
Cooley previously worked at Bobbie Brooks Mfg. Co. in New York City, as a sewing machine operator. That job enabled her to gain experience that enhanced her God-given talent alone with taking classes in Art Illustration at Oakland University.
In 1978, Beulah began catering to a select clientele which attracted others to her unique designs.
In 1983, "Beulah's Designer Fashion" was established, and she gained recognition as a fashion innovator. She appeared as a winner in fashion competitions, on local television and as one of the top ten designers nationwide in the International Design Competition sponsored by "Canadian Mist Designers of the Future". In 1992, one of her designs was declared a winner and was on display in the Black Art Museum in New York City.
In the late 1990'S Beulah Cooley created an unusual line of  Denim Peplum Suits with French Cuffs and Covered Buttons.  Cooley loved to work with unusual fabrics. She created a line of Natural Burlap Suits lined with silk, form fitting Suits with French Cuff and Rhinestone Buttons to accent the Burlap to give the "BEULAH COOLEY COLLECTION"  it's signature style. She is known for her French Cuffs with Covered Buttons and different styles of beautiful buttons alone with designs from conservative to high fashion to fit your needs.
The Cooley Collection are available online and in boutiques in surrounding area of metro Detroit, Chicago, Memphis, and other states to name a few.

In 2002 the Detroit City Council presented Beulah Cooley with a Testimonial Resolution and  in 2004 she was presented a "SPIRIT OF DETROIT AWARD" for her many accomplishments. Also at that time,  The Beulah Cooley Collection was also shown in numerous Ebony Fashion Fair Shows all around the world, including the Renaissance Center in Detroit and at the Music Hall also in Detroit.  One memorable event was the 2002/03 "Simply Spectacular" Ebony Fashion Fair where a model Rebecca Briscoe hit the runway in a transparent evening gown of bronzed denim and a matching coat. This gown left the crowd oohing and ahhing and many of them were absolutely speechless. (Excerpts from September 2002 Jet magazine)

In 2005 at "THE MARCH OF DIMES FASHION EXTRAVAGANZA" at the Burton Manor in Livonia MI., Beulah Cooley showcased a collection of  rainbow colors of Burlap alone with the natural color Burlap line with Silk organza easy to wear.  There was an overwhelming response from The audience,  customers, media, and  sales elevated to the top. The Burlap line is the #1 seller and has sold from east to west, north to south and is still in high demand for the unique man or woman.

In 2006, The Beulah Cooley collection and models "Rocked the Runway" at The Detroit Fashion Week at the beautiful Hotel St. Regis in Detroit MI,  hosted by Brian Heath. With her beautiful designs being showcased on the Front Page of the Michigan Chronicle.


In 2007, The Beulah Cooley Collection was back again at The DETROIT FASHION WEEK. News papers and magazines  were inquiring to find out if the Cooley Collection  would be showcased in the show.  Later, The Crain News called Detroit Fashion Week to inquire if they could come and have an exclusive shoot for  THE BEULAH COOLEY COLLECTION.  And indeed they did just that, sending a personal photographer to capture every backstage and onstage moment with this creative and unique designer.
In,  December 2008 DETROIT FREE PRESS NEWS Fashion Writer Cassandra Spratling chose four Local Designers to dream Big and create a gown for Michelle Obama for the inaugural balls. Beulah Cooley was one of the four designers whose creation and article appeared in the newspaper on the front cover and in color, head line reading --Local designers dream big, outfit Michelle Obama for inaugural balls.
On March 15, 2009 at the March of Dimes Fashion Extravaganza, Beulah Cooley Collection was the highlight of the show as she showcased her Spring Collection of linen. Models dressed in halterback jumpsuits, shorts sets and sleeveless dresses, just to name a few of her beautiful designs hitting the runway. Beulah Cooley is a long time supporter of the March of Dimes previously being the Fashion Coordinator for seven years.

March 2009 Beulah Cooley was one of many guest at THE DON DAVIS (A Motown Music Veteran) 70th Compostion Tribute Scholarship Award Gala at the MGM Grand hotel ballroom in Detroit MI. Cooley arrived wearing one of her own Couture gowns and personal  models were outstanding wearing elegant gowns from the Beulah Cooley Couture  Collection on the red carpet, Hollywood Style with cameras flashing, many heads turning and guest asking them the question, who is your designer? 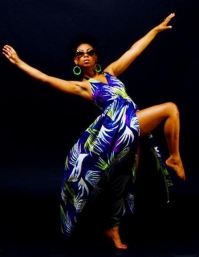